The MV Wilhelm Gustloff was sunk by Soviet submarine. More than 9400 died - about half- children

The MV Wilhelm Gustloff was a German ship which was sunk on 30 January 1945 by a Soviet submarine in the Baltic Sea while evacuating German civilians, officials and military personnel from Gdynia (Gotenhafen), occupied Poland, as the Red Army advanced.

By one estimate 9,400 people died, which would make it the largest loss of life in a single ship sinking in history.

Constructed as a cruise ship for the Nazi Strength Through Joy organisation in 1937, she had been requisitioned by the Kriegsmarine (German Navy) in 1939.

She served as a hospital ship in 1939 and 1940. She was then assigned as a floating barracks for naval personnel in Gdynia before being put into service to transport evacuees in 1945 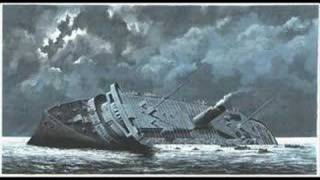 Operation Hannibal was the naval evacuation of German troops and civilians from Courland, East Prussia and the Polish Corridor as the Red Army advanced. Wilhelm Gustloff's final voyage was to evacuate German refugees and military personnel as well as technicians who worked at advanced weapon bases in the Baltic from Gdynia, then known to the Germans as Gotenhafen, to Kiel.

The ship's complement and passenger lists cited 6,050 people on board, but this did not include many civilians who boarded the ship without being recorded in the ship's official embarkation records. Heinz Schön, a German archivist and Gustloff survivor who carried out extensive research into the sinking during the 1980s and 1990s, concluded that the Wilhelm Gustloff was carrying a crew of

The ship and its escorting torpedo boat were soon sighted by the Soviet submarine S-13, under the command of Captain Alexander Marinesko. The U-boat sensing equipment on board the escorting torpedo boat had frozen rendering it inoperable as had the Gustloff's anti-aircraft guns, leaving the vessels defenceless. Marinesko followed the ships for two hours before launching three torpedoes at the Wilhelm Gustloff′s port side about 30 km (16 nmi; 19 mi) offshore between Großendorf and Leba soon after 21:00 (CET), hitting it with all three. (Marinesko intended to fire four torpedoes but the fourth misfired and the crew had to disarm it.) The first torpedo (with sign onboard — "For Motherland") struck near the port bow. The second torpedo ("For Soviet people") hit just ahead of midships. The third torpedo ("For Leningrad") struck the engine room in the area below the ship's funnel, cutting off electrical power to the ship. The Gustloff took a light list to port and settled rapidly by the head. The fourth torpedo (disarmed) was named "For Stalin".

The water temperature in the Baltic Sea at this time of year is usually around 4 °C (39 °F); however, this was a particularly cold night, with an air temperature of −18 to −10 °C (0 to 14 °F) and ice floes covering the surface. Many deaths were caused either directly by the torpedoes or by drowning in the onrushing water. Others were crushed in the initial panic on the stairs and decks, and many jumped into the icy Baltic. The majority of those who perished succumbed to exposure in the freezing water.

Less than 40 minutes after being struck, the Wilhelm Gustloff was lying on her side and sank bow-first, in 44 m (144 ft) of water. Thousands of people were trapped inside on the promenade deck.

All four captains on the Gustloff survived its sinking, but an official naval inquiry was started only against Wilhelm Zahn. His degree of responsibility was never resolved, however, because of Nazi Germany's collapse in 1945.

The figures from the research of Heinz Schön make the total lost in the sinking to be about 9,343 total, including about 5,000 children. This would make it the largest loss of life in a single sinking in maritime history.