Explosion at a military site near Severodvinsk, Russia.

Accident likely occured in the moment of launch of Burevestnik hypersonic rocket. A hazmat team was checking the medical evacuation helicopter and its patients after it evacuated injured personnel from the explosion at a military site in Severodvinsk today, a short spike in background radiation was reported after the incident

Russia’s nuclear energy agency has said an explosion that caused radiation levels to spike in the Arkhangelsk region was caused by an accident during a test of an “isotope power source for a liquid-fuelled rocket engine”.

In a statement released late on Friday, Rosatom said five of its employees had died as a result of the accident and three more were being treated for burns.

The statement was the first confirmation that the agency was involved in the incident, which briefly drove radiation levels up to 20 times their normal levels in the nearby city of Severodvinsk. 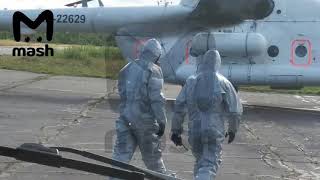