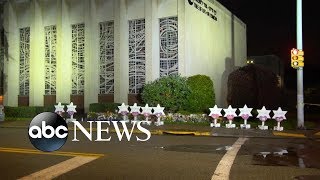 Robert Bowers, 46, of suburban Baldwin, surrendered to authorities after Saturday morning's shooting at the Tree of Life synagogue. He made anti-Semitic statements during the shooting and targeted Jews on social media, according to a federal law enforcement official. Bowers faces 29 charges in a rampage that left the historic Jewish neighborhood of Squirrel Hill and the rest of the nation stunned.