Jānis Krūmiņš  was a  Latvian center basketball player. Helped by his height (about 220 cm), he was the first giant center dominating under the European baskets, for years.

Janis Krumins was born on January 30, 1930 in Raiskums township, Cēsis District, Latvia. His father was a big strong man who died when Janis was still a boy.

At the age of 13 Krumins had to start working, as a collector of tree resin. Very soon, he became an efficient worker, partly because his height (he was 2m tall by the age 14) allowed him to reach where others failed.

He liked his work and later was hesitant to turn professional player, saying that he could always get injured and lose his job as a basketball player, but not as a resin collector. As a well-built giant, Krumins attracted attention of many coaches who tried to bring him to wrestling, boxing and athletics.

Famous Soviet athletics coach Victor Alexeev even brought him for a month to an athletics training camp. All attempts failed because of lack of interest from Krumins.

In 1953 he was found by coach Alexander Gomelsky and brought to the basketball club ASK Riga. Gomelsky was struggling to make ASK the top Latvian club and needed a strong center player. Although Krumins never played basketball before, Gomelsky intuitively felt his potential and was spending 2 hours personally training Krumins before the team training. Gomelsky considered Krumins the only apprentice in his whole career—all other players were well established before coming to him. Physically, Krumins had good coordination and extraordinary strength, but he was slow. His height was exceptional for that time and was variably reported between 218 and 223 cm;the variation was mostly due to his natural body contraction during the day and over his career.

With a weight of 140 kg he was described as well built and "dry". He was not a talented pupil, but was exceptionally persistent and performed all the drills set by the coach. His strongest point, according to Gomelsky was his mental balance and reliability. On the other hand, he was too shy for a leader.

Seeing a 220 cm giant, most defenders did not hesitate to step on his toes, push or punch him. Krumins patiently took all abuses and when once asked why he didn't fight back, replied that he was afraid he might accidentally kill someone. Later, when Krumins became a star, his modesty brought another problem—he was instantly recognized on streets and cheered and touched by the crowd, about which he felt uncomfortable. He stopped using public transport and drove a car instead.

Another mundane problem was his height that hindered finding clothes and shoes. Luckily, Krumins was spotted by Marshall Hovhannes Bagramyan. Bagramyan, a big man himself, was favorable to tall sportsmen and after meeting Krumins ordered to build a 3-meter-long bed, and make custom shoes and clothes for him. 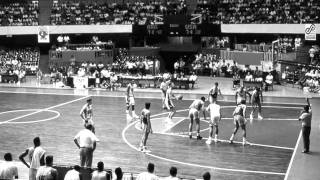 Krumins remained a calm player over all those years, still sparing small opponents. However, he was well emotional and active in the key games and fought full power against players of his size. Krumins had a rare free throw style—with two hands from the belt rather than usual top throw, still scoring 90% on average.

A Russian poll in 2006 put him as 3rd most popular Soviet basketball player of all time, after Arvydas Sabonis and Vladimir Tkachenko.

Krumins was shy with people, including women. He met his wife Inessa by chance. In 1960, as a sculptor she was ordered to make his bust on occasion of 20th anniversary of Latvian Soviet Socialist Republic. They had two sons and a daughter. After retiring from basketball, Krumins closed up in his family and became a renowned metalworker, molding art pictures out of metal by the sketches of his wife