She was born Freda Josephine Mc Donald, a poor black child from St Louis, MO. She survived the 1917 racial riots but they made a strong impression on her. Finally, at age thirteen, Josephine ran away from home. She liked dancing, and a few months later, she became a Vaudeville performer at the Plantation Club in Harlem. These were exciting times (the "Harlem Renaissance") in this predominantly-black neighborhood of New York city. Young Josephine later joined popular Broadway revues where she quickly drew attention and positive reviews for her dancing skills, enthusiasm and her comedic talent.

In October 1925, she arrived in Paris where once again, her energy, unique personality and infectious enthusiasm got attention. Her big breakthrough came with a part in "La Revue Nègre," a jazz show. Josephine performed several acts including "La Danse Sauvage" (the Wild Dance). She was exotic, sensual, and performed half-naked in a feathered skirt.

These were the Roaring Twenties, and the integrated Paris society loved her. The famous cabaret Les Folies Bergèrebecame her step stone to fame. She starred in a new act where she performed naked (in her iconic costume of 16 bananas strung into a skirt.) By the late 1920s, she had become a major celebrity all over Europe where she was the highest-grossing (and most photographed) artist. In the early 1930s, she was the first African American female to star in major motion pictures. Along the way, Josephine worked hard at developing her considerable talents. Her singing voice, stage and public persona evolved over time as she became one of the 20th century most revered entertainers. 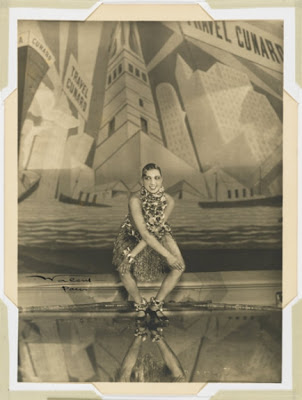 The Jazz Age: Energetic and goofy performances in the early years 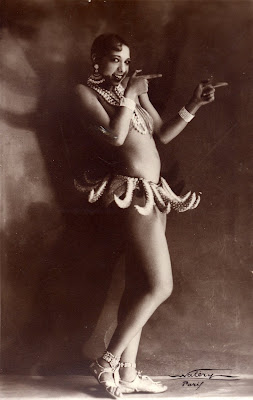 Josephine never forgot her humble beginnings but by the mid-1930s, she was a very wealthy woman, and she spent lavishly, on clothes, jewelry and, as an animal lover, on pets. She visited and fell in love with a run-down property in the heart of the Périgord region of France, les Milandes. One can only imagine what the place meant to the poor, illegitimate street child who had left the slums of St Louis so many years ago. 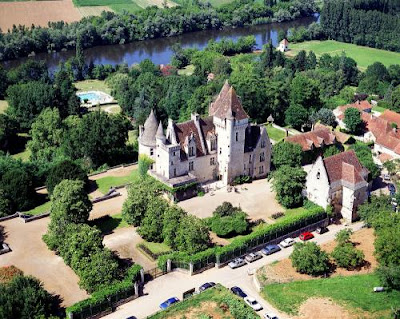 One of Josephine's greatest disappointments came in 1935-1936 when she visited the United States and starred in the Ziegfield Follies. American audiences were not receptive to the idea of a black woman with so much wealth and power. The show drew negative reviews and Josephine was replaced after a few performances. The New York time called her: "the Negro Wench." Devastated, Josephine returned to Europe, where she married a Frenchman (her third husband) and became a French citizen.

"It [the Eiffel Tower] looked very different from the Statue of Liberty, but what did that matter? What was the good of having the statue without the liberty, the freedom to go where one chose, if one was held back by one's color?  No, I preferred the Eiffel Tower, which made no promises." -- Josephine Baker 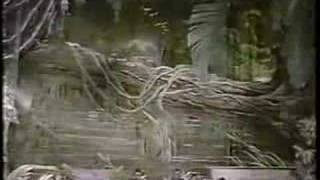 Josephine was determined to give back to France, her adopted country. She detested Hitler and his ideology (she was black; her husband was Jewish.) After World War II started and part of the country was occupied by German troops, she volunteered to help the Free French Forces (led by General Charles de Gaulle from London) and took enormous risks throughout the war.

She worked as a Red Cross nurse; raised money; entertained troops in North Africa. She hid Jewish refugees and weapons in her castle. She also worked as a spy and an underground courrier for the French Resistance (hiding secret messages in her band's music sheets.) After the war, she was awarded several distinctions including the prestigious Legion of Honor. 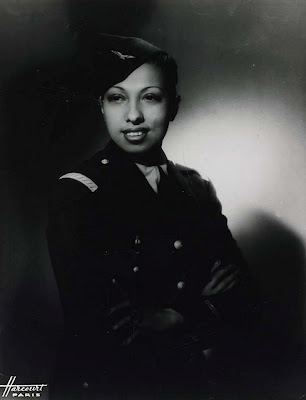 Immortalized by the Harcourt photo studio

Josephine lived to defend causes she believed in. She fought against racism all her life. She married her fourth husband, Joe Bouillon, at Les Milandes after the war. Together, they started adopting orphan children from all over the world (Josephine was never able to have children of her own and gave birth to a stillborn child during the war.)

Overtime, the family grew to include ten boys and two girls. Josephine loved her "Tribu arc-en-ciel" (Rainbow Tribe) and was a devoted mom to her children. She showcased her family at les Milandes to advocate tolerance and brotherly love. Thanks to her considerable fortune, Josephine created a theme park around the castle, complete with a nightclub (where she performed on occasion,) a hotel, a J-shaped pool, an experimental farm, and the replica of an African village. She named her magic kingdom: "Le Village du Monde" (the World's Village.) 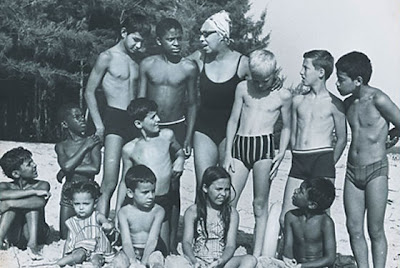 Josephine and her "Rainbow Tribe"

Josephine visited the United States during the 50s and 60s with renewed vigor to fight racism. When New York's popular Stork Club refused her service, she engaged a head-on media battle with pro-segregation columnist Walter Winchell. The National Association for the Advancement of Colored People (NAACP) named May 20 Josephine Baker Day in honor of her efforts.  It was also during this time that she began adopting children, forming a family she often referred to as "The Rainbow Tribe." Josephine wanted her to prove that "children of different ethnicities and religions could still be brothers." She often took the children with her cross-country, and when they were at Les Milandes tours were arranged so visitors could walk the grounds and see how natural and happy the children in "The Rainbow Tribe" were.  Josephine continued to travel to the United States, and during her visits she developed a close friendship with American artist Robert Brady. Now divorced from her fourth husband Jo Bouillon, she was looking for companionship on a more platonic level.

Brady felt the same, and on a trip to Acapulco, Mexico in September 1973 they went to an empty church and exchanged marriage vows. Though no clergy was present, and they were never legally joined, it was an important personal bond that she and Brady maintained the rest of her life. Josephine told very few people about the pseudo marriage, fearing the press would ridicule it.

Sad farewells Josephine agreed to perform at New York's Carnegie Hall that same year. Due to previous experience, she was nervous about how the audience and critics would receive her. This time, however, cultural and racial growth was evident. Josephine received a standing ovation before the concert even began. The enthusiastic welcome was so touching that she wept onstage.

On April 8, 1975 Josephine premiered at the Bobino Theater in Paris. Celebrities such as Princess Grace of Monaco and Sophia Loren were in attendance to see 68-year-old Josephine perform a medley of routines from her 50 year career. The reviews were among her best ever.

Days later, however, Josephine slipped into a coma. She died from a cerebral hemorrhage at 5 a.m. on April 12.  More than 20,000 people crowded the streets of Paris to watch the funeral procession on its way to the Church of the Madeleine.

The French government honored her with a 21-gun salute, making Josephine Baker the first American woman buried in France with military honors. Her gravesite is in the Cimetiére de Monaco, Monaco.

Josephine Baker has continued to intrigue and inspire people throughout the world. In 1991, HBO released The Josephine Baker Story. The film garnered five Emmy Awards. The film also won one of the three Golden Globes the film was nominated for that season.