Interior Minister Suleyman Soylu said at a press conference in Istanbul that a moving car was detonated targeting riot police on duty near a stadium in the district of Besiktas, where a football match ended about one and half an hour before. 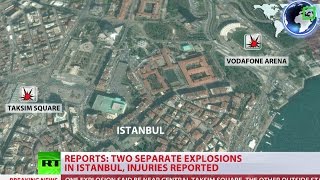 Forty-five seconds later, a man blew himself up in Macka Park just across the stadium, Soylu said, noting that about 10 suspects have been detained.

The explosions were so powerful that they could be heard on both sides of the Bosphorus, a strait that divides the metropolis into two parts, press reports said.