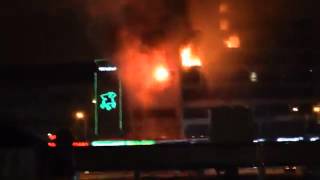 Chechnya declared independence from Russia in beginning of nineties, but after 2 wars, which totally destructed tiny country, Russia regained control upon its colony.

Rebels blocked themselves in the building of Grozny media house

In the morning, representative of Chechnya Ramsan Kadirov announced, that 7 rebels were eliminated in Media House and situation is back under control of Russian occupation forces in Chechnya